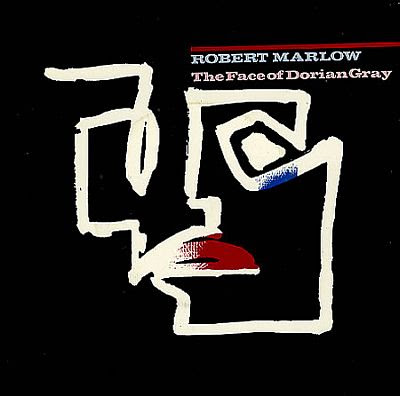 Every afternoon after lunch, we were free until 5.30. It was meant to be a time when you went of and did activities and in fact I think those few hours were actually called Activities. There was no activities for me except chain-smoking with my mates in the downstairs common room, where there was pool and a Pacman machine and a telly.

I didn't watch much TV over the two years I was a boarder. Only TOTP, The Tube and The Young Ones were regular favourites, though I do remember catching things like Miss World and Threads, you know, important TV landmarks. But the telly blared away in the corner all afternoon, so it was possible to catch bits of things like Blockbusters and Razzamatazz.

The latter often caught my attention. I remember being mesmerized by Kate Bush doing There Goes A Tenner, and until only a couple of weeks ago wondered if the leaping man I'd seen in front of Vince Clarke singing a song I couldn't identify for 29 years was an early incarnation of Erasure or perhaps an unrealeased single by The Assembly. Turns out it was someone called Robert Marlow, who, to my surprise, recorded all sorts of records with Clarke as a kind of post-Assembly prototype Erasure and was friends with Depeche Mode. It all makes sense now.

These small slices of perfect electropop are treasures that have remained buried for way too long. The Face Of Dorian Gray is a hit that never was, and as for No Heart, it's a total gem. I'm so thrilled to find them at last I'm going to post them all. And look, I even found that Razzamatazz performance of the song I now know to be I Just Want To Dance. I had to convert the YouTube clips to MP3s as they don't seem to be on itunes or CD. But surely it's only a matter time before these forgotten classics see the light of day again.

Email ThisBlogThis!Share to TwitterShare to FacebookShare to Pinterest
Labels: The Face Of Dorian Gray/Robert Marlow 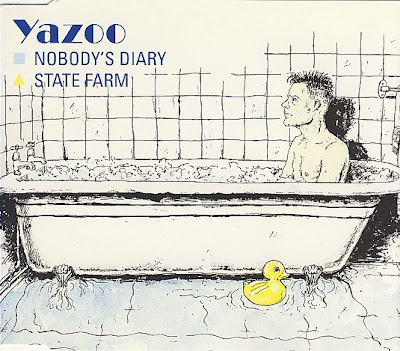 Teenage romance: A merry-go-round of make-ups, break-ups, angst and drama usually ending badly but with something possibly salvageable through music. Or not.

Music played a vitally important part in relationships back then. You perhaps bonded over it in the first place, then it may be that your shared love of a certain song would bring you together. And once you're an item you'll have your favourites, records you'll buy for each other, songs you couldn't wait to hear on the radio, crap songs that would make you laugh together. You only have to read this blog to see that memories are formed this way.

And then of course, there's the break-up song. In those days, there was no song more important than the one you'd put on a compilation tape asterisked, to point out that you wanted to remember your time together this way or indicating the way you were feeling now you'd been dumped, or perhaps explaining why you were the dumper this time. It had to be chosen carefully.

Nobody's Diary was one I recall. I'd been dumped, I was kind of devastated as it came out of the blue. What I was trying to say here was don't forget me. What I was really saying was why did you bin me off and are you sure you don't want to take me back? But it didn't happen. The girl in question didn't get it at all. On the tape she did for me she chose You Took by The Church. You took a piece of my heart, went the chorus. I was pleased by this. That's the effect these things are meant to have. She's still single to this day, by the way.

My favourite, however, was suggesting songs for others. My roomate, who fancied himself as a love 'em and leave 'em type, but who I now realise had lots of underlying abandonment issues, dumped a girl who was totally mad about him. My song suggestion? Paul Young's Wherever I Lay My Hat.

Tittering up my sleeve, I popped it on the turntable and we gave it a listen. He thought it was perfect, just the sort of image he wanted to project. The fact that his paramour hurtled into a nervous breakdown was beside the point. And this song soundtracked most every relationship he ever had. Fool. 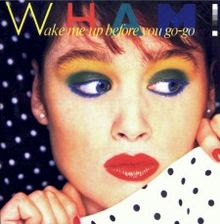 Much as I'm a fan of Eighties music - had you noticed? - there's one band that still leaves me as cold today as it did back then: Wham!

That said, when I first saw Young Guns on TOTP I thought it was great, and rushed out to buy it. So did everyone else and of course it was the start of something big.

But to me, with each single came diminishing returns, and by the time we got to Wake Me Up Before You Go-Go Wham! had properly become a laughable bouffant-haired teenybob nonsense duo and while, like them, I was busy choosing life, I was firmly not a fan.

Follow-up singles like Freedom and I'm Your Man made me tune out, and as for Careless Whisper, you couldn't turn on the radio for hearing it at least once an hour in 1984. The opening sax bars still make me shudder. The whole George Michael solo career is a no-go area for me too, though I've a bit of time for Heal The Pain but that's really it. I wouldn't mind if he wasn't such a tit.

So while I'll happily extoll the virtues of other tween faves from the me decade, I draw the line here.

And if, dear reader, you were wondering why I've been so quiet, I've just spent 10 exhaustingly expensive but enormously fun days in Las Vegas, a world of its own pumping constant music that doesn't go beyond 1990, depending where you are. You'll hear odd things like The The's Uncertain Smile or B Movies Remembrance Day, songs that never were on the US chart radar at all, which makes it all the more surreal.

I still feel a bit strange.

Email ThisBlogThis!Share to TwitterShare to FacebookShare to Pinterest
Labels: Wake Me Up Before You Go-Go/Wham 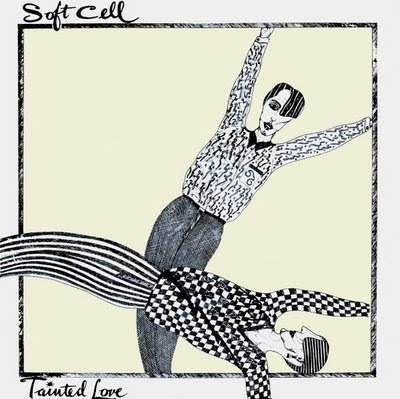 Some songs live forever. Others are played for a few years but eventually die out. The rest never have any sort of existence once they drop out of the charts.

Then there are the songs that refuse to go away. Remember Relax? A huge number one at the start of the year then back in the top three later that summer. Something similar that refused to die in 1981 was Tainted Love.

Those around at the time will remember just how huge this was. The soundtrack of the summer, it was still very much in evidence at the start of sixth form. I remember girls getting up and dancing to it in the common room. I was quite taken aback. I thought it was amazing that people should do such a thing. How freeing. But oh, the common room. Now there was a place.

Initially, I was far too initmidated to go in. Just inside the door was where the cool set sat. It was their long-standing section of this vast cavernous room. Each bank of seats had its own clique. How one got to join it was anyone's guess, but in the end you just had to be bold.

For weeks a friend and I hovered just outside the door. Occassionally we would walk through. Then we got brave and sat in the coffee bar bit before eventually joining the jet set. It's not that we didn't know (some of) them, but there was a barrier to break through. Luckily a childhood friend who I had been at school with and who laughed at all my jokes affected my introducton. But it was gradual and painful and terrifying, but I it was something I had to do.

Life in the common room was hugely competitive clothes and music wise, but to be there meant you'd arrived. Though it seems utterly ludicrous that it should matter so much now, it was a huge big deal at the time. You want to be a part of things, and life could be miserable if it wasn't happening.

As a child I was bright and confident, but once I hit my teens I got awfully shy. It was at this point at college that it was time for a reinvention. I felt I was slightly behind the curve in fashion, and suddenly this mattered to me. I joined the Oxfam trawlers and patronised Top Man. Out with the blue Harrington and the Pod shoes that mum had bought in a sale, and in with pixie boots and soul slippers and the Phil Oakey hairdo. Oh dear God the pictures. But you know, I was 16. Everything was changing.

Whenever I hear Tainted Love I always think of those girls dancing to it in the common room and it means something. Not sure what. But it does.

Posted by Jon Peake at 2:54 AM 4 comments: Links to this post 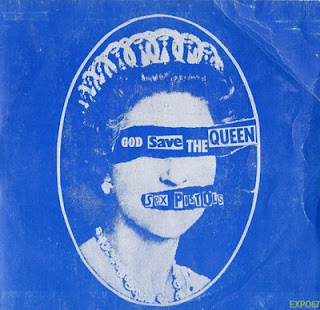 Stop me if you've heard this one before, but let's cast our minds back to the Silver Jubilee of 1977.

The run-up was of course dominated - to me and all my friends at least - by the question of whether the Sex Pistols would be No.1 for the Jubilee. No one I know had ever heard it, let alone bought it, and only when I told someone I'd seen the words in either Disco 45 or Record Mirror did it all become clear as to just why this song might not be suitable for radio. Of course today you hear it on Radio 2, but back then, it was the biggest deal.

Someone at school discovered I knew the lyrics and I was quizzed by a group as to how they went. Still not ever having heard the song I could quote the lyrics, but I didn't know what a fascist regime was or why the Queen was considered a potential H-bomb, but I just went with the flow.

Browsing in our local record-cum-gift-cum bookshop, the quaintly named Acorns, one day, a man was going through the singles and pulled out a copy of God Save The Queen and mentioned to shop assistant that he was surprised to see they had this in stock. The assistant replied that they 'had to, really', and I think I know what she meant. What sort of record shop would this be if they censored their stock to placate the national mood?

Anyway, I wish I'd bought it. But I had bigger fish to fry as we were off to Cornwall for Jubilee week, so no street parties for us, even though one was planned in our road. Thankfully it pissed down so much that we came home early, just in time for the party. I had had my birthday in St Ives (and yes, it's next Tuesday in 2012), and the week continued overcast but fair and we all enjoyed the party. All I recall is Uncle Tony getting tight in a deckchair and collecting a potato salad from the old bag we called Crabstick and taking it to the central food dispensary at Dr Buchanan's house.

I'm sure we had fun. The Sex Pistols weren't number (or were they?), and here we are 35 years later with that same Queen on the throne, Vivienne Westwood now has time for her and Johnny Rotten advertises butter. Perhaps because he 'has' to.

*I did do a similar entry but who'll ever remember, eh?

Posted by Jon Peake at 5:56 AM 2 comments: Links to this post