1976: Thinking of you's working up my appetite 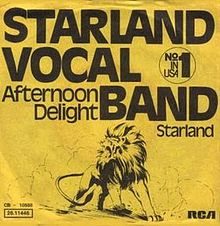 Do you remember your first day at school? Not the very first day, but the day you started secondary school aged 11?

Chilling isn't it? Well it was if you were me. I'd been at a private school for the past two years, having left the local school and gone further afield. I'd never seen any of my old chums at all in those past two years, but I did see the odd person around and heard reports from neighbours who stayed on.

So when I started I saw a whole lot of old faces I'd completely lost touch with, as well as a sea of completely new ones. When we were all split up into the groups we'd be with for the next five years there were a couple of old favourites and we soon got reacquainted, but I remember that first day well.

I walked in with a former neighbour, a one-time friend I'd grown apart from. Meeting that morning it was quite apparent just how different he'd become. He swore like a trooper, and for me having spent two years at a strict Catholic school where anything more than uttering 'gosh!' would see you sent straight to hell, I was shocked. And I'd heard tales of newbies having their heads flushed down the loo and being beaten up on the way home. It's safe to say I was utterly terrified.

It was never that bad of course, and it would be two years until Grange Hill would start. But when it did it rang totally true.

It was proper back to school weather on that first day. Hazy sunshine on the quiet walk home, all feeling a bit lonely and a bit sad.

I've done a lot of schools in my life, and it never got any easier being the new boy. I was never the only one, but it sure felt like it. The feeling didn't last long and by the week's end it was business as usual.

I remember that first week watching Top Of The Pops. Dancing Queen by Abba was number one, and this was in the charts, though hardly setting them alight. However it was never off the radio, and mum and dad returned from America saying they'd heard nothing else but. It's well remembered, despite never reaching the Top Ten, and at the time I found it strangely comforting in those stark new boy days. Most of all it reminds me of building a damn in a stream.

This country-tinged slice of AOR is now top of everyone's guilty pleasures list. Why feel guilty about something so soothing? I disapprove of guilty pleasures. Like what you like, and bathe in its warm glow.

Email ThisBlogThis!Share to TwitterShare to FacebookShare to Pinterest
Labels: If You Leave Me Now/Chicago