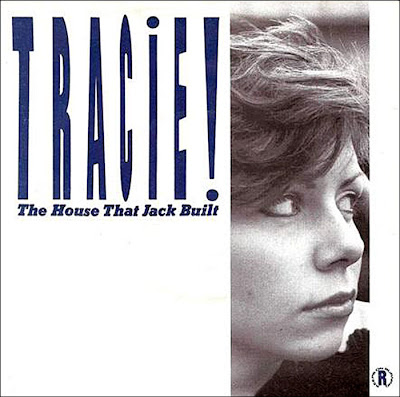 Whenever it's this time of year and I think of Easter 1983, I always think bleak.

A dull, overcast holiday period, mum back from Bahrain, not doing very much at all except endless trips to London to this new-build flat they'd bought as an investment. They did well out if it after two years, but I've never been able to track down its whereabouts (and they couldn't remember) except that it was in Fulham.

Finally, after parking in a road with a familiar name on Sunday when we took my mother-in-law to the Ideal Home Exhibition (she was concussed by an electric potato peeler but that's another story [not really]), I finally realised this flat's location, and it's more or less directly behind Earl's Court, just around the corner from West Brompton Tube. At the time I thought it was in the arse-end of nowhere.

So why, sitting in that flat for days on end did we not just jump on the Tube and go record shopping or something, rather than sitting in and getting a headache eating Smith's Salt & Shake (which briefly came in actual flavours at this time) and watching Sons & Daughters before heading back in the car on the long journey home?

No imagination, fear of rough Londoners wanting to mug me, no money and general apathy probably, plus having to get this flat ship-shape. So it was daytrips to London and back to that little house we still had on the go which was rented out when we weren't there. It didn't feel like a home anymore. It was devoid of anything personal due to the rental aspect, just a a small table and some bentwood chairs in the 'breakfast room' and all feeling rather ghastly.

When I hear The House That Jack Built I'm reminded of being bored to sobs.

I had a bit of a thing for Tracie (or should it be Tracie!?), especially when when she released Give It Some Emotion. I thought she was amazing and clearly going to be a huge star. With the backing of Paul Weller and all those Smash Hits covers she was bound to be massive. But she wasn't. I thinks he's a DJ in Brighton now? Any ideas?

I wasn't the biggest fan of this song, but I bought it anyway as I bought into the whole Respond ethos. Then I put it away and didn't listen to it for about 20 years until Tracie's one and only album appeared on itunes. So giving it a virtual spin I still thought it was rather empty on the produciton side, though she does have a lovely voice. Give It Some Emotion has still got in a Sixties Belle & The Devotions pastiche way, but the real corker is I Love You (When You Sleep), a single that wasn't a hit. It's gorgeous.

Anyhoo, Easter could never be as boring as that one. My favourite was when me and Mrs P didn't go anywhere but to films every day. It poured with rain and was the best Easter ever. Must have been '93. We went to see Howard's End.

I should add that I got married on Easter Saturday 1996, but that wasn't Easter as such. It didn't feel like Easter. It felt like a wedding. It was an event, not just days off for a public holiday. It was overcast then too. I'm not sure I've ever known a sunny British Easter.

Email ThisBlogThis!Share to TwitterShare to FacebookShare to Pinterest
Labels: The House That Jack Built/Tracie