1982: Turning the joint upside down 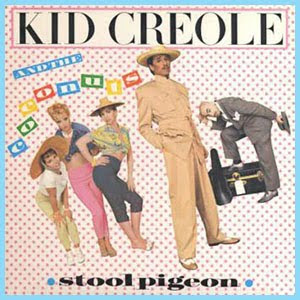 All songs from our youth are evocative, whether they're good or bad. But some bring back such awful memories you never want to hear them again. And without wanting to bring you down or nuffink, this is one of those.

By rights, this piece of storytelling pop fluff, released as the summer holidays were just getting going and at the height of Kid Creole and the Coconuts' fame, probably reminds some people of the best of times. For me, it's the worst of times.

It's late one evening in Bahrain. Mum and dad are out. The phone rings and it's my grandma who, having studied the local paper's obituary column in forensic detail as she always did, has read about the death of our next door neighbour. He’s died of meningitis. At 15.

I'd never received news like this before. I couldn't really take it in. I remember instant tears. I was stunned. Our good friend and neighbour, someone we'd grown up with had died. I was totally floored.

Until this point it had never even occurred to me that a friend might die. Sure, we'd known people die but no one I was close to. We’d had the son of a friend of my parents die of a brain tumour at 20 a few years back, but I didn't really know him. He was older than me and he wasn't my friend. The odd relative had popped off, but I barely remembered Auntie Mary or my grandad. Uncle Ted was the last relative to die, in 1978, and though he'd been to stay a couple of times he'd lived in Canada for more than 30 years. It didn't count.

That day, everything changed for me. I became obsessed by death. It was something that was out of my control and I didn't like it. I probably thought about this every day for about 20 years. It now informed the way I lived my life.

This neighbour was only a year younger than me. He’d come home from school on the last day of term feeling ill. The doctor thought it was flu. When he started fitting an ambulance was called and it took countless doctors many hours to work out it was meningitis. By then of course it was too late, and the family made the decision to turn off the life support system.

I remember the day we moved into our new house in 1975. He was playing in the road and he offered me and my brother a go on his skateboard. A firm friendship was cemented, with him and his sister and the rest of the family. They could’nt have been more different to ours being intellectual, musical and eccentric. But firm friends were were and despite many fallings out with him and the rest of the neighbourhood kids over the years - one summer would be with them, the next spent with the three kids next door but two, then friends again for Christmas - you know how it was. But we were always going to be friends.

Just before he died, he became music mad, taping any song that came on the radio that caught his fancy. ABC's Poison Arrow and Graham Parker's Temporary Beauty were two I recall he played over and over again. The later is quite apt really. I can't hear it without thinking of him.

Without sounding melodramatic, I really think that the day he died was the day my childhood died. The end of the innocence and a massive jolt into the real world I was not ready for.

It’s nearly 30 years ago, but it’s still raw. My pain is nothing compared to what the family went through of course, but it’s pain nonetheless.