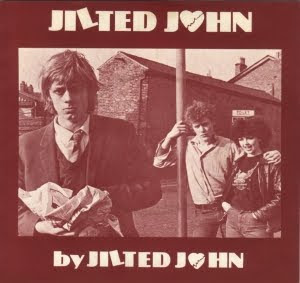 Teachers and music never crossed over when I was at school. I've heard tales from those only a few years younger than me about teachers doing compilation tapes for pupils or lending them their albums. I cannot imagine anything like that ever happening when I was at school, and if it had it would have been met with a) derision; and b) mortification. Plus, I doubt any teacher would trust any of their charges not to wreck their records.

That said, there was one occasion when a teacher revealed that he actually listened to music - the music we listened to - and it elevated him to almost legendary status among my peers by the final bell. With everyone but me that is, because he was a PE teacher and PE teachers disliked me as much as I disliked them.

This guy was probably early twenties (ancient!), had a beard and longish hair, a Hampshire accent and wore a powder blue Adidas tracksuit that would make Sue Sylvester green with envy.

It was the time of Jilted John, John Shuttleworth in punk parody period at the time when punk was already doing that itself. A great comedy tune with lots of great lines that were quoted to death by all, especially the 'yeah, yeah, it's not fair' bit, and it had risque words in it like puff, tart and - yikes! - moron.

One lunchtime, as this was being reenacted for the zillionth time, this PE muppet walked by, chuckled, and remarked, 'yeah, but on the other side he's going steady with Julie'.

He knew what the B-side was! Everyone marveled at this revelation. It struck us that teachers were human too. Well, some of them. I bet Miss Ogg liked Sandy Denny.