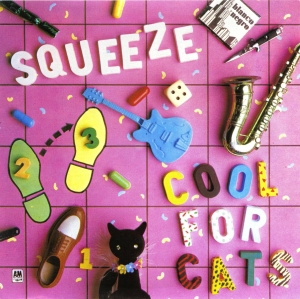 Was there anything quite as mortifying as being spotted out shopping with mother when you're a teenager?

I remember dying of shame when we pulled up at a traffic light and I was spotted by the person I sat next to in maths, him on his bike in one of those shiny green bomber jackets, me with mum's shopping basket on my lap. This song was all the rage at the time. Cool for cats, but not cool for me. It took years to live that one down.

Or the time when we went into Jill's Wools. While mum was loudly asking me to choose a wool for a jumper to be baggily knitted by the dreaded Auntie Maggie, and using my hideous mouthful of a name at every opportunity, the Saturday girl, a smirking great heap with a weaved lurex scarf and big jumper, arms folded, trying to contain herself, was drinking in my acute embarrassment. Of course we laughed about it on Monday morning. Or rather, she and her friends did.

I can't remember when I called a halt on such extra-curricular duties, but they got beyond the call of the duty eventually. In town I'd be at least five steps ahead, and shame of having to buy clothes and being treated like a living doll in front of mean-spirited shop assistants who knew your pain but relished it nonetheless was too much to bear.

We compromised eventually that I'd choose and she'd come and pay, which made me feel much more grown up and make me worry less that I'd end up as some anoraked milquetoast who'd live with mother, accompanying her on coach trips to ruined churches and visits to garden centres until the day she died like something out of an Alan Bennett monologue.

Even now I'm not mad about it, though it's incredibly rare. I can't help thinking I'm going to bump into a bunch of schoolfriends who'll spend the rest of the term mocking me. That said, we all had to go through it, didn't we?

Love the girls in this vid.

Email ThisBlogThis!Share to TwitterShare to FacebookShare to Pinterest
Labels: Cool For Cats/Squeeze