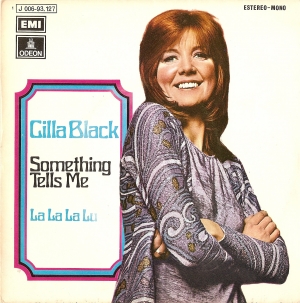 Remember the days when the singing stars of the day would get their own weekend variety shows?

Many's the time I remember sitting down to see Cilla Black, Shirley Bassey and countless other easy listening greats of the moment hosting their own TV shows. I especially recall The Cliff Richard Show fondly. He used to intersperse the singing with comedy skits, more often than not involving Olivia Newton-John.

One that still makes me chuckle quite a lot when I think about it is when Cliff came on with Olivia who was dressed as a wardrobe. Said Cliff, 'We've just been shopping and bought Olivia a whole new wardrobe'. I'm laughing now. Of course, if you think about it, it's not really that funny, but to a seven or eight year old me it was the height of hilarity. Say what you like about Cliff, he had a gift for comedy.

So what happened to the singer-turned-TV-host?  Some people will have grown up oblivious to the fact that Cilla Black has one of the greatest voices of all time, has had a string of truly excellent Top 40 hits and has worked with some of the biggest legends in the business. To them, she's just the host of Blind Date, Surprise Surprise or Moment Of Truth, who just happens to have been around for a long time.

The last person I can think of who had a Saturday night show was Lulu with that ill-fated lottery-encompassing bollocks Red Alert. But it's not like she hadn't hosted her own shows before. Then there was Charlotte Church's chat show, but it was on the wrong channel. She'd have been better just doing an all-singing, all-dancing comedy chat programme on ITV that would have pleased everyone from tots to teens to OAPs, rather than try to be an edgy Jonathan Ross type aimed at the post-pub crowd.

So who of today's crop of singers could happily be at home hosting an hour of variety on BBC1 on a Saturday night? And moreover, would they want to do it? Is it a move that seen as a kiss of death to a singing career? After all, none of the above are seen as exactly cool, are they and, Cliff aside, none of them were troubled by too many Top Of The Pops appearances once they'd moved over to TV.

We've had the odd special from Michael Ball and Michael Buble, but they're not in the same mould as those old Seventies shows. Whither Barbara Mandrell, Julie Felix and others of those ilk? Adele could be just what we're looking for, but let's give it a few years. In them meantime, Buffy Sainte Marie can't be busy. I bet she's a hoot.

We won't have Something Tells Me..., we'll have this instead. A big favourite of mine. Ladies and gentelmen, Miss Cilla Black *rapturous applause*

Email ThisBlogThis!Share to TwitterShare to FacebookShare to Pinterest
Labels: Something Tells Me/Cilla Black