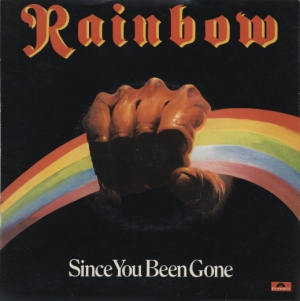 The NWOBHM was alive and well in 1979, especially in our maths group. Wait!, I hear you cry. What does NWOBHM stand for? The New Wave Of British Heavy Metal, of course. But you already knew that.

Back then the charts were awash with Motorhead, Thin Lizzy, Rainbow, Saxon and others riding this sudden wave of accessible pop rock. People were made for it, especially teenage boys. Two out of three hessian rucksacks boasted a badly drawn Motorhead logo, and leather jackets were studded so you could vaguely make out the name of Iron Maiden or Judas Priest, though you had to squint in a certain light if it was ever to make sense.

Our maths group - three out of five - took a turn away from the Police, Gary Numan and Showaddywaddy for a moment, when at the start of the autumn 1979 we welcomed a new arrival. He was Scottish and most interestingly his father was a prisoner officer at Parkhurst on the Isle of Wight. He was properly into his rock: AC/DC was a favourite, as well as old warhorses like Deep Purple, Led Zeppelin and Black Sabbath. But it was this new wave that was really captivating him, and which rubbed off on all of us.

Being in the deep south, we didn't have that many Scots around. He was a curio indeed, but mainly because of his heavy metal credentials rather than anything else. Not like when an Austrialian boy joined our class in primary school and we all gathered round to ask him if he'd ever seen a koala or a duck-billed platypus.

The Scot was a funny guy, disruptive like us all and lessons were a laugh-a-minute. Our teacher - Mr Hinde, Mr B Hinde (seriously), a smallish man with a big ginger beard wanted to appear strict but encouraged the banter, the singing of advert jingles (Oxo's Three Steps To Heaven pastiche always springs to mind) and the re-enactment of the Citizen Smith opening titles.

We laughed at his Reliant Scimitar car, what with it being from the makers of the Reliant Robin, and all waited for my brother to walk past the door and wave during our double period. This reached fever pitch eventually, so Mr Hinde would hover by the door and pull the blinds down just as he approached.

When his back was turned notes were passed around, and plans were constantly made to meet up under the Eiffel Tower on July 1, 2000, which seemed an awfully long way off back then. I was to bring the chicken drumsticks. We talked Top Of The Pops, Tomorrow's World, Not The Nine O'Clock News and Monty Python. But music was our first love, with Susan who sat over the aisle to my right the object of my affections, mainly because she wore mod shoes and laughed at all my jokes.

I learnt nothing in those lessons. Nothing to do with maths, anyway. But what I did learn was how to love heavy metal. This Rainbow song was a huge hit, and it opened the door to other stuff I'd been afraid of. This all sounds like pop now anyway, doesn't it?

I didn't see the Scottish guy once we'd left in 1981, though I did back into his mum's eau de nil Mini in a pub carpark in 1986, but that's another story.

Email ThisBlogThis!Share to TwitterShare to FacebookShare to Pinterest
Labels: Since You've Been Gone/Rainbow